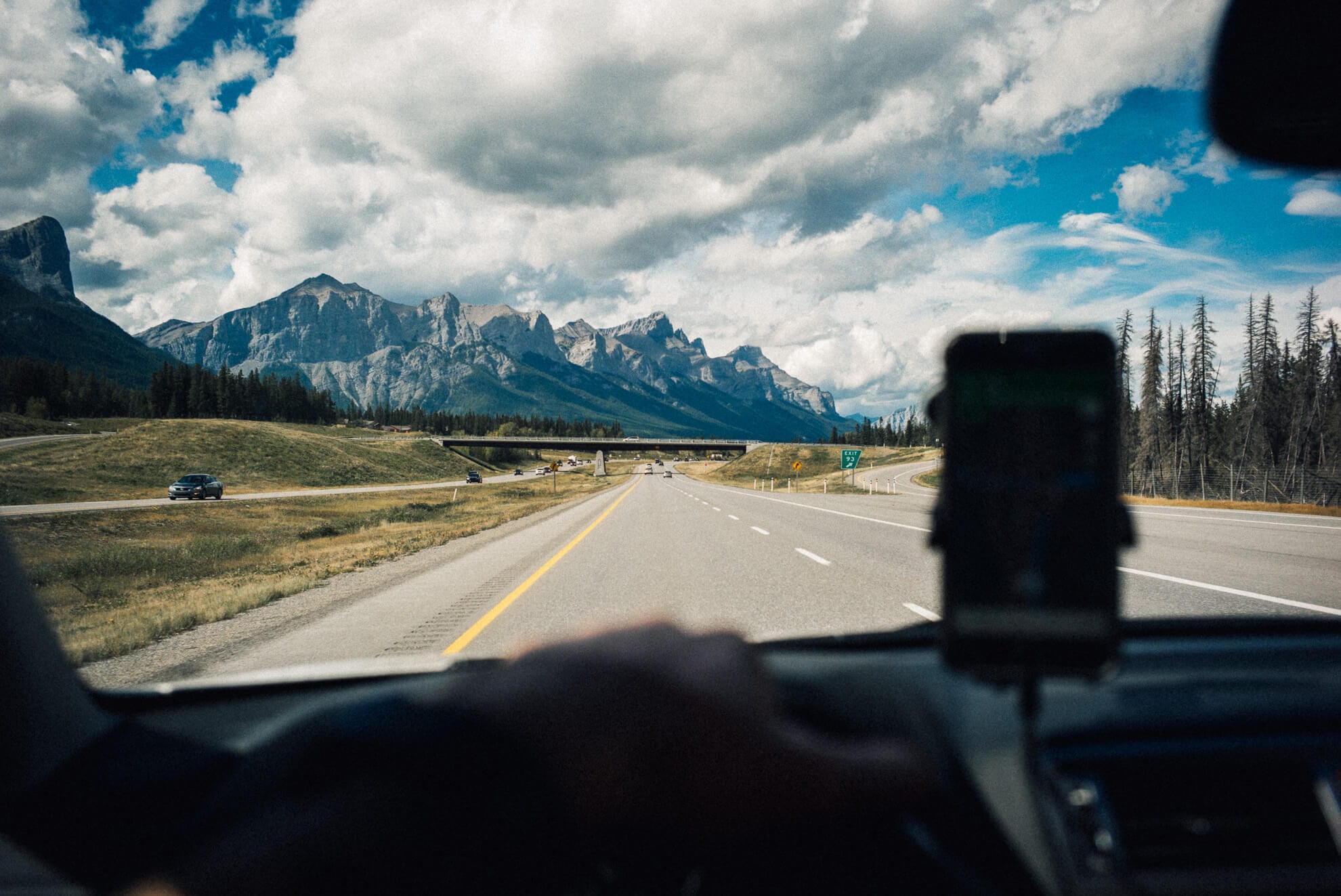 Up until now, I had only visited Canada one other time. It was last year, around this same time, when I had made an extended trip to the east coast to visit a bunch of friends. During one of the weekends I was there, we made a trip to Toronto. As wonderful as that adventure was, this is not the time for that story. This is a story about one of the most beautiful national parks I’ve ever had the pleasure of visiting; Canada’s first national park, Banff National Park.


I’ve had countless number of friends visit Banff. They’ve all told me stories about the “blue water” and how photos don’t really do it justice, or how the glaciers and rivers are some of the most beautiful they’ve ever seen. But now, it was finally my turn to experience it for myself. 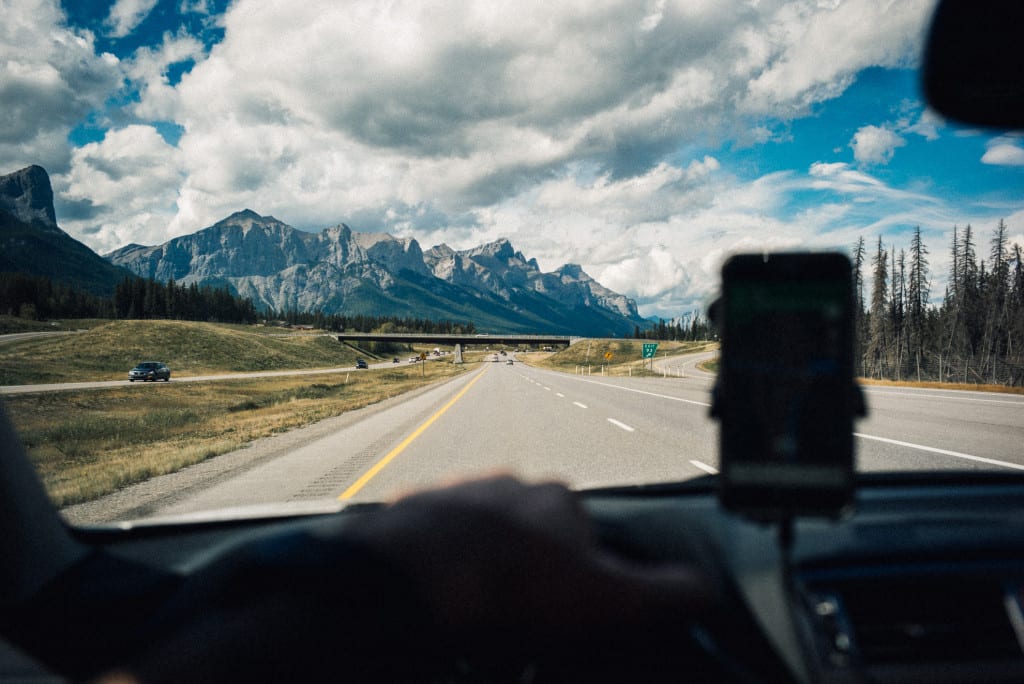 On the drive into the park we were seeing storm clouds above us, but clear blue skies ahead. This felt like a good sign, and made for a beautiful drive along the mountains. Our first stop in Banff National Park was Two Jack Lake, although a smaller lake compared to the others we would see, still remarkably stunning. Due to the possibility of a snow storm and the realization that the camping gear we packed wasn’t ready for snow, we were considering other accommodations. We thought about looking into renting an oTENTik, which is what came up while searching for Yurts. To this day, I’m still not sure exactly how to go about renting one. The only thing we found out from our research about them was that they are only available at Two Jacks. When we arrived at the lake to inquire about them, we came to find the campground was closed.

We moved along and drove further down the road until it landed us in a parking lot next to the lake. As we were hanging around the lake, we started to see the storm clouds roll in. We had gotten just in front of them. In order to avoid getting soaked by the incoming rain, we took a quick 15 minute lunch break before getting back on the road to Lake Louise, where I had originally made a campground reservation.

We passed the entry to the parking lot at Lake Louise and pulled up to the valet for the resort. I asked him about the viewpoint above it. There was a short discussion about a Gondola that apparently escorts people up, but he was unsure if it was running at the moment. We parked our car and geared up to go check out the lake. 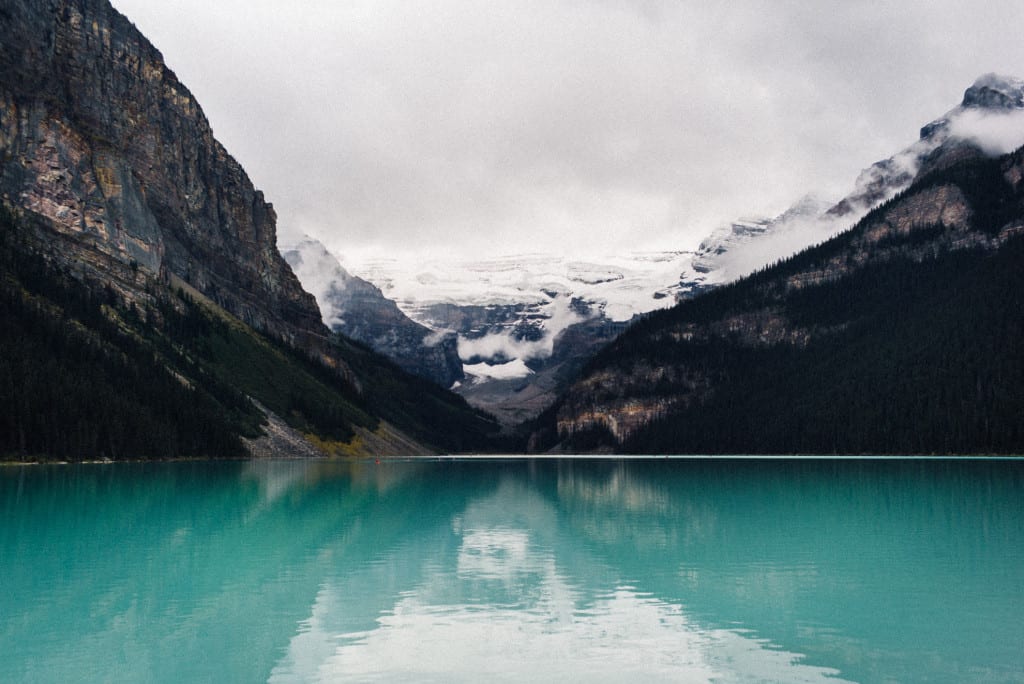 It was definitely one of the busier places I had been, but still nothing short of amazing. This is where we got our first real sight of the “blue water.” It looked somewhat murky, but not dark or dirty. It resembled a turquoise colored milk, surrounded by the snow tipped Mount Temple, Mount Whyte and Mount Niblock. And the water was cold. Very cold.

After I snapped a few photos of the lake, I setup my tripod in order to get a photo of my girlfriend, Maya and myself. Noticing what I was doing, one of the nearby tourists came up and offered to take our photo. I agreed. And after Maya and I had a brief conversation with them, I noticed draped over his shoulder was his Yashica medium-format film camera. I had the same one with me. We geeked out about film photography for a little bit.

He introduced us to his girlfriend, who was very nice and it seemed she was also some sort of photographer. After chatting for a bit we discovered they were visiting from Germany. They had purchased a car with the intent of selling it in 6 months after they had traveled all around the states. It’s always inspiring to hear stories like that; living your life day by day, no plans too far in the future.

Before parting ways, we exchanged contact information and told them to hit us up if they came through Portland. Before we got in the car we took another quick look at the forecast. It looked like it had changed from snow to rain and only for part of the night. We decided we would camp after all. We made the plan to setup the campsite then hit Lake Moraine for sunset.

Lake Moraine is only about 20 minutes from the village. The sun was dropping pretty fast which made this the longest 20 minute drive ever. We got to the lake, parked the car, geared up and walked out to this beautiful lake view. We noticed some people at a higher viewpoint, and we looked around to find a way up. We found a path of stairs that would lead us to a viewpoint that sat on what looked like a large pile of rocks. This was the view I had seen in photos. It was beautiful. The water with it’s infamous blue hue. It looked fake, like something photoshopped. The air was freezing in our lungs, our hands white from the cold and eyes watering as the wind hit our faces. But still we sat there, in complete silence, looking at this neon blue lake right in front of us. Watching as the hidden sunset slowly turned the mountains black and the lake even brighter. It was like nothing we had ever seen. It was amazing. Humbling, really. 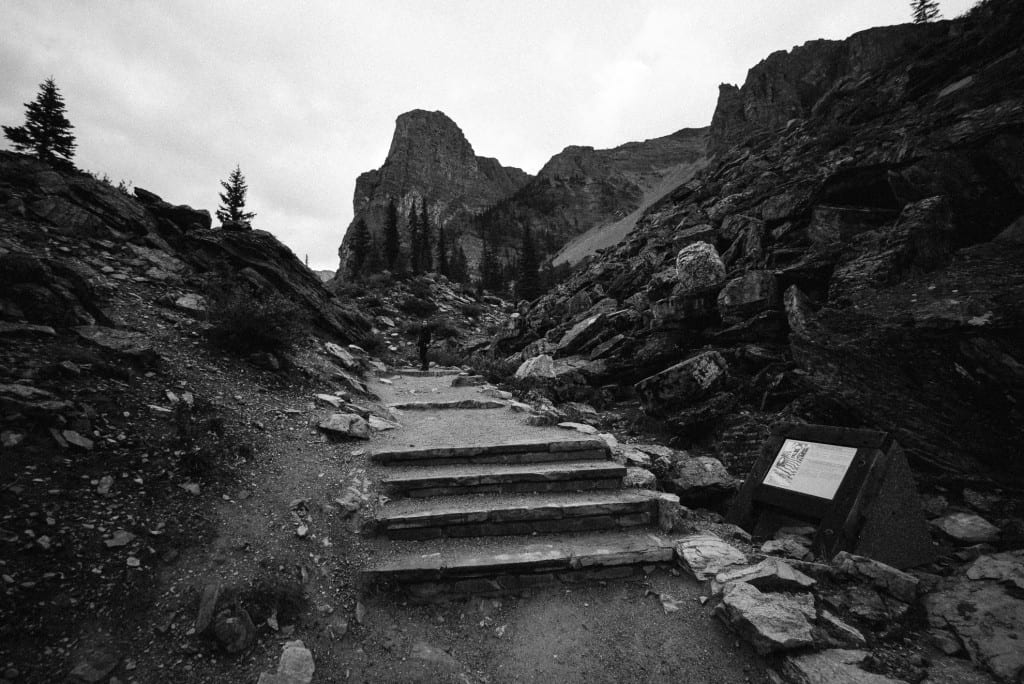 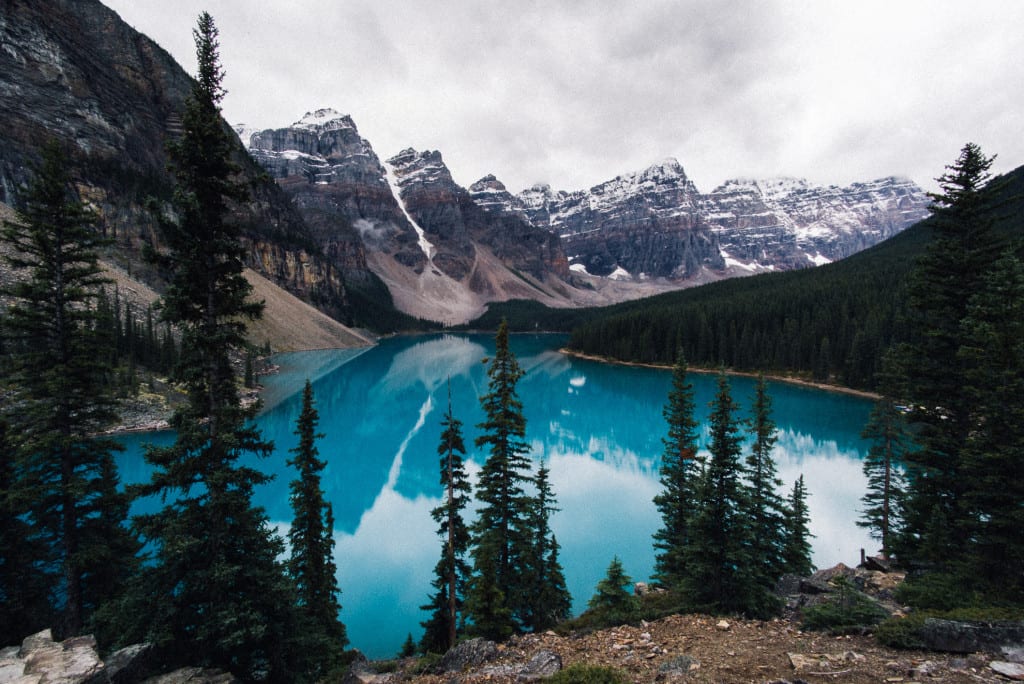 After soaking in the view, we headed back to camp. We made a fire and cooked dinner. Sometimes, while out on these adventures, the end of the day is most exciting to me. I get to go through all the photos I’ve captured and reflect on the experiences I’ve had throughout the day. This was definitely a day we could reflect on. It was a new and exciting experience for the both of us.

With that said, I can tell you without a doubt, Banff National Park should be in your top places to visit if you haven’t already. This trip in our ROAMERICA campervan rental was one for the books and I can’t wait to visit again!

Words and photography by Silas Sao 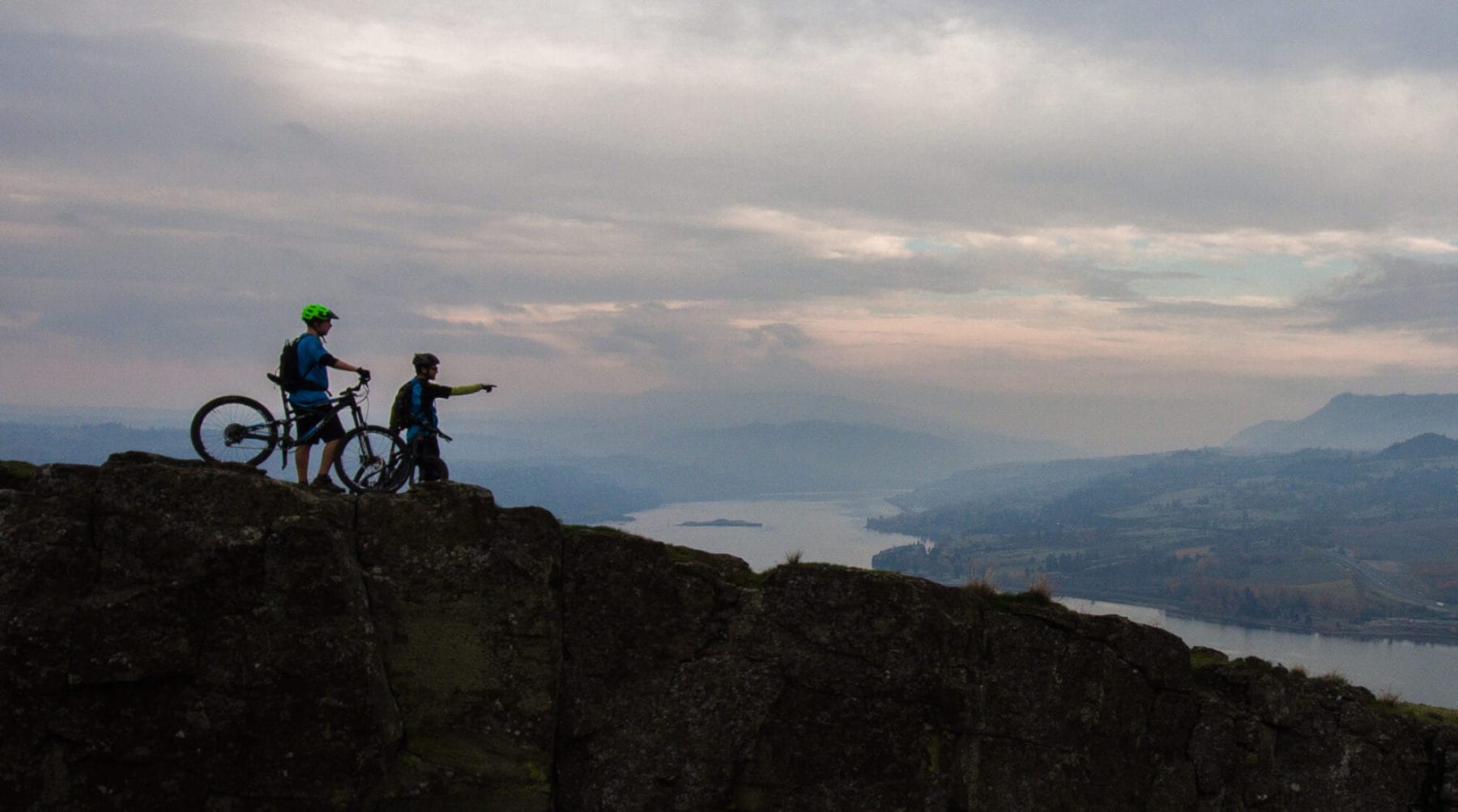 This time of year getting outside in the Pacific Northwest has its advantages. Cooler temperatures make being active more enjoyable as well as thinning out the crowds of your favorite trails. Recently photographers Alec Carrier and Mike Branscum headed out to enjoy mountain biking Hood River, Oregon with some buddies to capture exactly what this shoulder season psyche can look like. 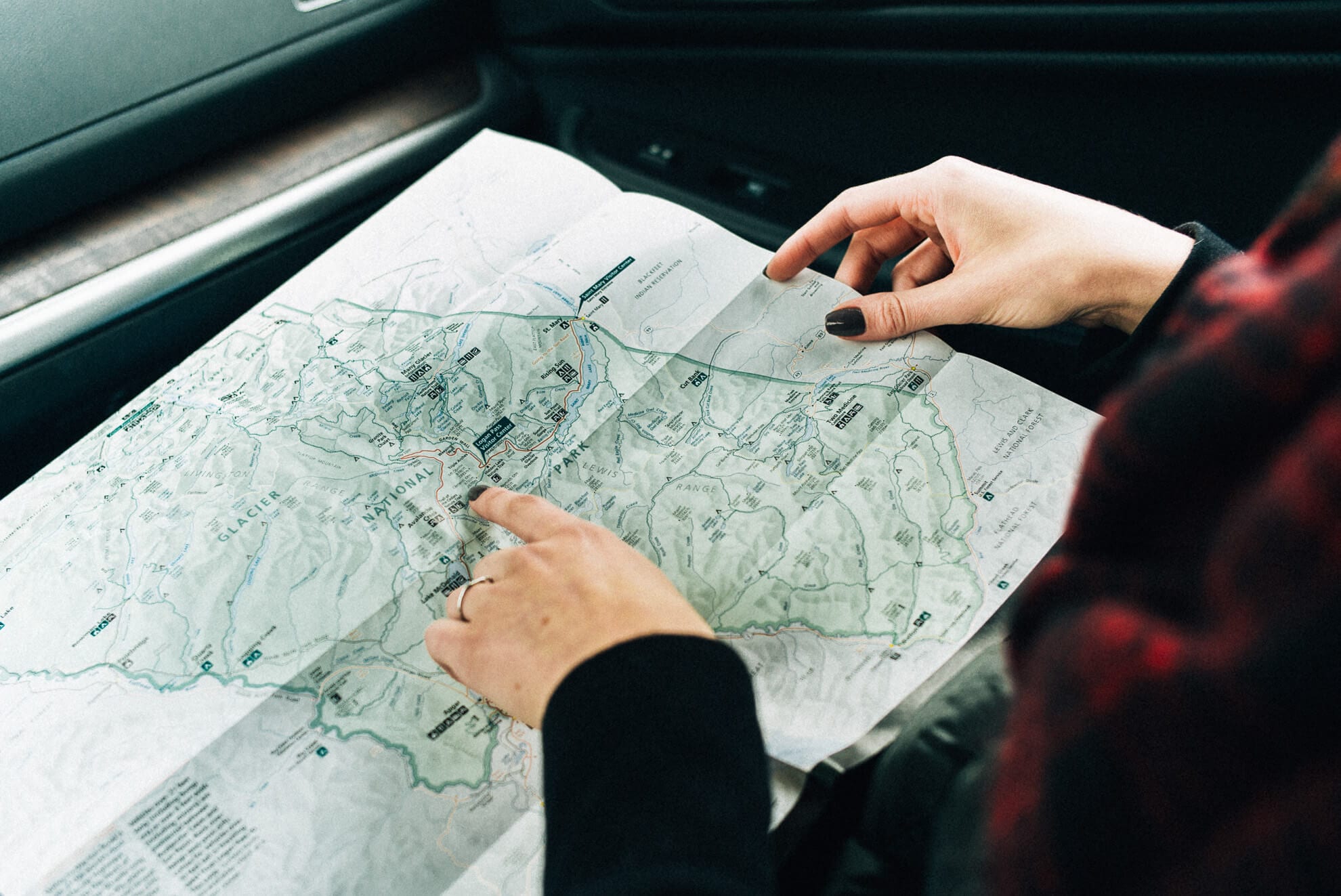 There's nothing better than waking up in a tent in Glacier National Park in winter, covered in morning dew, smelling like campfire from the night before. Mornings like these remind me of when I was a child, and when my grand parents used to take my little brother and I camping when we would visit for the summer. 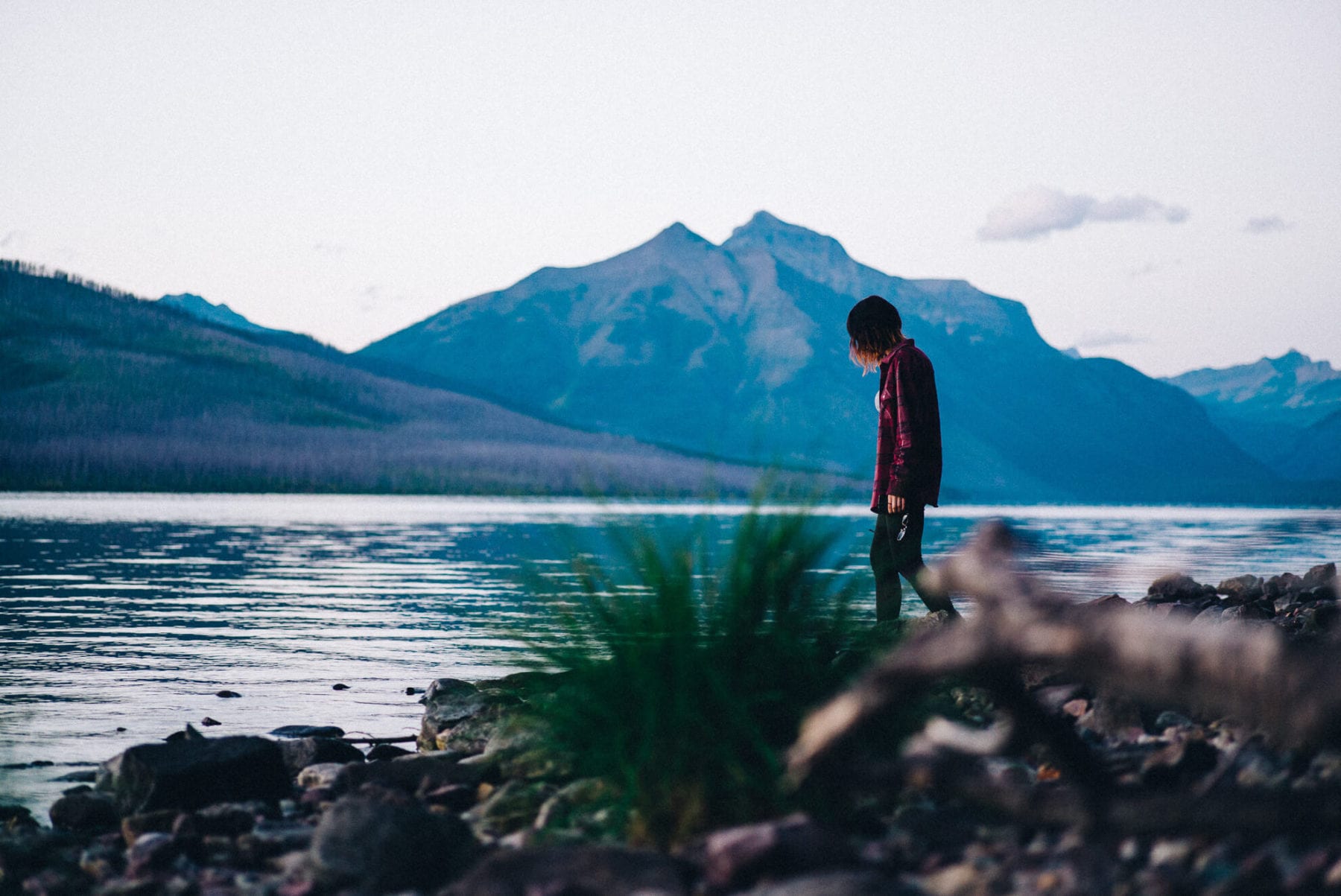 After 11.5 hours of driving in our ROAMERICA campervan, we pulled into a gas station on the west side of Glacier National Park. It had been a while since we stopped so we were both eager to get out of the car. We pulled into a gas station to refuel the car and ourselves in preparation for the drive to our campground. We got gas, some souvenir patches and continued driving on our route into the park.

Perfect way to explore the PNW. Taylor and Gretchen were amazing to work with. The vehicle performed well and was the perfect size and set up for two people.

I've used ROAM for two of my adventures. They are awesome. Gretchen and Taylor always make sure we are well equipped with the gear we need. They will go out of their way to make sure your experience is top notch!